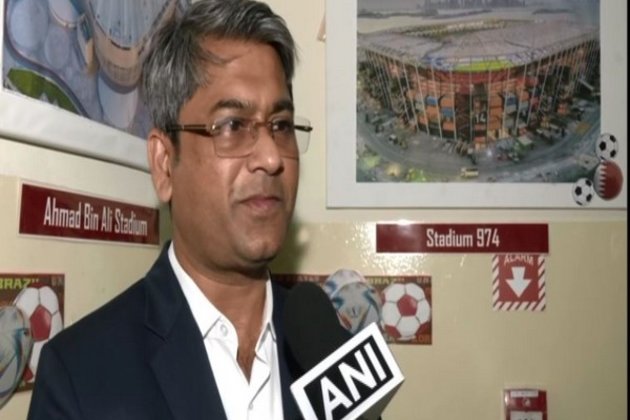 Chaubey participated at an event organised by the Indian Cultural Community at Qatar to felicitate Vice President of India Jagdeep Dhankhar.

Speaking to ANI, the All India Football Federation chief said, "Representatives of 211 nations came to witness the football World Cup. I want the game of football continues to grow. Due to Virtual Reality technology mistakes have been minimized in football and there are no human errors by the referee. This World Cup is the amalgamation of talent, skill and technology. "Chaubey asserted confidence in India's participation in FIFA World Cup in the coming years.

Asked about India's prospects in FIFA World Cup, Chaubey said, "I wish football continues to be a great game. Indians are football enthusiasts. I wish the Indian team play in the world cup in the coming times. If we introduce a systemic training system, it will not be difficult."He further hailed Qatar Government and Football Federation for showcasing a great engineering infrastructure.

"The engineering and architecture in Qatar are state of the art. Qatar Government and Qatar Football Federation have showcased an engineering magnum opus in the FIFA World Cup. It was a concern how the matches will be played in such a high ambient temperature. But the way they controlled the temperature inside the stadium, it feels like the tournament is being played in Europe," he added.

The biggest extravaganza of football, FIFA World Cup 2022 started on November 20 in Qatar and will be held till December 18. Eight stadiums across Qatar will be hosting the 64 matches of this tournament.A total of 32 teams from five confederations are competing at Qatar FIFA World Cup 2022 for the biggest prize in football. As many as 64 matches will be played during the course of 29 days.

France is the defending champion, having won their second title in 2018 after defeating Croatia in the final. French are aiming to defend their crown against a world-class competition offered by these aforementioned teams.

It is the final World Cup tournament for Lionel Messi, the Argentina striker considered one of the greatest ever footballers of all time. It is also highly likely that 37-year-old Cristiano Ronaldo will don the Portuguese colours for one final time.

The quarterfinals will start from December 9 onwards, followed by the semifinals from December 14 onwards. The title clash will take place on December 18 at the Lusail Iconic Stadium in Lusail.