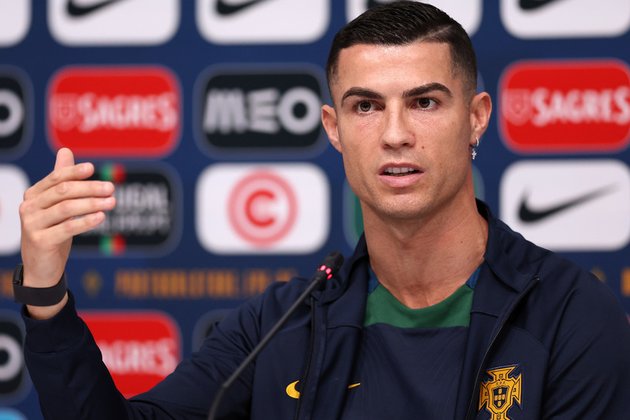 Portugal captain Cristiano Ronaldo has insisted his full focus is on the World Cup in Qatar, describing himself as "bulletproof" as he responded to the fallout from his incendiary interview with Piers Morgan.

Ronaldo, 37, took aim at various figures at club team Manchester United - including manager Erik ten Hag and US owners the Glazer family - in a remarkable discussion with Morgan which aired in two parts on UK television last week.

The interview has led to reports that United will seek to terminate their contract with the forward, who had already attempted to engineer a move away from Old Trafford before the start of the season.

Now in Qatar with Portugal as they prepare for their opening World Cup match against Ghana on Thursday, Ronaldo made what was described as a "surprise" appearance in front of the media at the team's training base on Monday - telling them "I talk when I want to."

"I don't have to worry what others think. I talk when I want to. Staff, players, everyone knows me, they know what I think, they've known me since I was 11, they won't be influenced by what [the critics] say."

The saga surrounding Ronaldo and Manchester United has overshadowed Portugal's build-up to the World Cup, with much being made of a clip which appeared to show frostiness between the number seven and teammate Bruno Fernandes as they met up for national team duty.

Ronaldo insisted that the footage had been taken out of context, with the same being said of a training clip which appeared to show tension with Joao Cancelo.

"We were playing around last week," Ronaldo said of the incident with Fernandes. "His plane was late, and I asked him, 'Did you come by boat?' Please, don't ask players about me, ask about the World Cup."

Ronaldo is the all-time top scorer in men's international football with 117 goals, and won the European Championships with Portugal in 2016 as well as the UEFA Nations League in 2019 - although the World Cup remains a major title missing on his glittering resume.

The five-time Ballon d'Or winner insisted he had nothing to prove, but added it would be a "dream" to triumph with Portugal in Qatar.

Portugal take on Ghana on Thursday in Group H, before meeting Uruguay and South Korea.