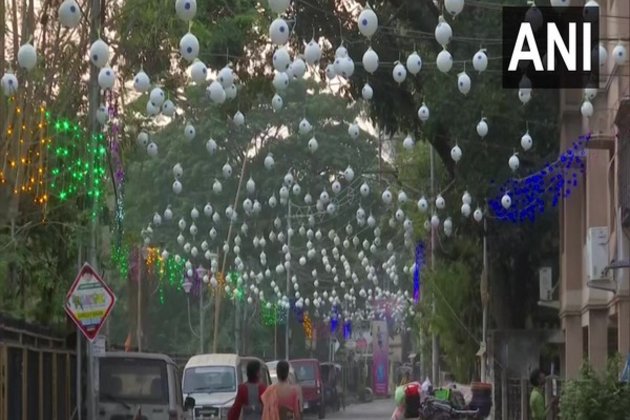 Kolkata (West Bengal) [India], November 21 (ANI): With the start of the FIFA World Cup 2022, football fever has gripped Kolkata as several parts of the city were decorated with flags of teams and posters of favourite players.

The Argentina Fan Club in Kolkata is decorated with flags and posters of Argentina and other countries participating in the World Cup. Giant screens are installed at various places in the city.

Not to mention, the large cutouts and banners of Lionel Messi and Diego Maradona in the streets depict the enthusiasm of the soccer aficionados of the city.

"We are extremely positive this time. Argentina has an experienced team. Messi is playing really well. We are celebrating Football and FIFA World Cup. We will be watching matches on a giant screen and we have created a fan park here," Pragnan Shah, a member of Argentina Football Fan Club, Kolkata told ANI.

The biggest extravaganza of football, FIFA World Cup 2022 started on November 20 in Qatar and will be held till December 18. Eight stadiums across Qatar will be hosting the 64 matches of this tournament.

A total of 32 teams from five confederations are competing at Qatar FIFA World Cup 2022 for the biggest prize in football. As many as 64 matches will be played during the course of 29 days.

France is the defending champion, having won their second title in 2018 after defeating Croatia in the final. French are aiming to defend their crown against a world-class competition offered by these aforementioned teams.

It is the final World Cup tournament for Lionel Messi, the Argentina striker considered one of the greatest ever footballers of all time. It is also highly likely that 37-year-old Cristiano Ronaldo will don the Portuguese colours for one final time.

Meanwhile, Enner Valencia scored a brace to help Ecuador defeat Qatar in the opening game of the 2022 FIFA World Cup at the Al Bayt Stadium in Al Khor, Qatar on Sunday.With this win, Ecuador became the first team to beat the host nation in the opening match of the World Cup in the 92-year history of the tournament.

The quarterfinals will start from December 9 onwards, followed by the semifinals from December 14 onwards. The title clash will take place on December 18 at the Lusail Iconic Stadium in Lusail.