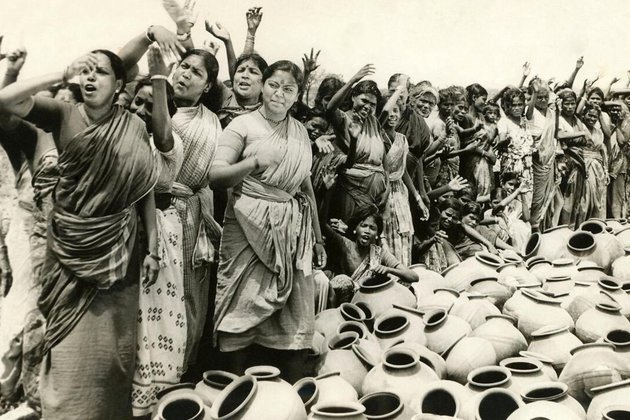 The 44th edition of the Festival des 3 Continents has opened in the western French city of Nantes. This year's event honours Indian cinema, with an eclectic programme dedicated to the golden years of filmmaking from 1970 through to 1990.

Over the next two weeks, audiences in Nantes and in cinemas throughout the Loire-Atlantique region can feast their eyes on 90 fiction and documentary feature films from Latin America, Asia and Africa.

Many of them have never been screened in Europe.

Besides the official selection, there is a tribute to Japanese filmmaker Hirokazu Kore-eda (winner of the 2018 Cannes Palme d'Or), who will be attending the festival.

There is also the presentation of the complete work of Mike De Leon, an essential figure in Filipino cinema, and a dive into the films of Argentinian Raúl Perrone.

India and its illustrious cinema industry is highlighted with a special focus on the intensely creative period of the 1970s and '80s - a time when political issues, history and cinema intersected.

The 14 heritage films present the rich diversity in Indian cinema, pushing beyond the stereotypes associated with Bollywood - the Hindi film industry based in Mumbai.

Linking past and present

"It's about creating a balance because, in the public's mind, Indian cinema is linked to Bollywood which is a very particular way of making film and not the only one," Jerome Baron, the festival's artistic director told RFI.

There are 56 different languages and just as many ways of expressing Indian culture, Baron says, insisting on the importance of maintaining a link between contemporary films and historical archives.

"Looking back at the past is another way of understanding present-day cinema," he insists. It is also something that sets the festival apart from other events, and keeps the public coming back each year.

"When I discovered the restoration of 'Thampu' at the Cannes Classics in May, I was so astonished by the film, which is, in my view, an absolute masterpiece," he says, referring to the 1978 film by director Govindan Aravindan.

Curious about the process of restoring films, Baron got in touch with Shivendra Singh Dungarpur - founder of the Film Heritage Foundation in India, who curated the selection for the festival.

But this endeavour is not without its challenges, both financial and technical, he says, indicating the need to raise awareness over the importance of preserving social and cultural heritage through film.

"In a world where the moving image has been reduced to content to be consumed on the go, on demand, on cellphones and personal devices, where the 'democracy' of the digital medium makes everyone a filmmaker, editor or musician, the idea of cinema as an art form is further diluted."

Baron's organisation did an archival project on Saeed Akhtar Mirza, one of the most important directors of the Indian cinema's New Wave in the '70s and '80s.

Mirza's debut film "Arvind Desai ki Ajeeb Dastan" (1978) will be screened for the first time in France, in the director's presence.

It's the story of the son of a rich businessman, dabbling in Marxist philosophy and struggling to come to terms with the rich-poor divide. The film won several awards, including the Filmfare Critics' Award for the Best Film in 1979.

"This celebration of the rebellious poets of Indian cinema in Nantes reaffirms our commitment to the preservation and restoration of India's rich film heritage, especially those films that won acclaim, but live on the fringes of the mainstream, and hence are in even greater danger of disappearing as the commercial world turns its backs on them," Dungarpur says.

Deeper understanding of the world

Baron is keen to stress that the festival is "not seeking a form of exoticism" but rather offers different perspectives on the world.

"The younger newcomers I spoke to said they are trying to find a more sensitive, deeper image of the world they live in than the one they get in the media.

"They can get news from every country in five minutes thanks to the internet, and videos coming from China, Japan, Honduras. But the filter of cinema, of art, gives them another point of view."

Although the representation from the African continent is thin this year, Baron points to the importance of a growing trend in documentary filmmaking, such as "Nous, etudiants" ("We, Students!"), 2022, by Central African director Rafiki Fariala.

There will be a special screening of "Sambizanga" (1972) by Sarah Maldoror which follows the early days of the struggle for independence in Angola. A leading figure of African cinema who died in 2020, French-born Maldoror made numerous films in Algeria and Portuguese-speaking Africa, including politically engaged documentaries and fiction films on decolonisation.

The prizes for the International Competition will be awarded on 27 November, followed by the screening of Hirokazu Kore-eda's latest film "Broker" (which won Best Actor at the Cannes Film Festival 2022), ahead of its release in French cinemas on 7 December.

Click here to see the full programme of 3 Continent Festival.