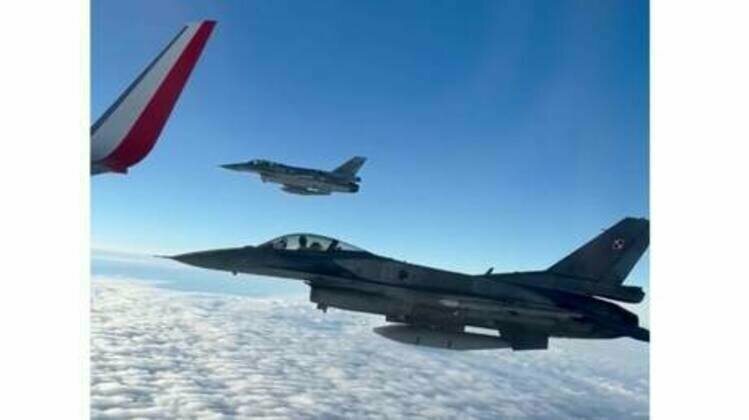 The Polish national football team was given extra protection for part of its journey to the World Cup in Qatar, with a pair of F-16 fighter jets accompanying the team's aircraft.

Led by prolific striker Robert Lewandowski, the Poland team set off for Qatar on Thursday ahead of their opening World Cup game against Mexico next week.

A video shared on the team's social media accounts showed their aircraft being flanked by fighter jets, with the crew waving to the football stars and displaying a message of support.

"We were escorted to the southern border of Poland by F16 planes!" read the tweet accompanying the footage. "Thank you and greetings to the pilots!"

The special escort comes after two people were killed this week in a missile strike on Polish territory, not far from the Ukrainian border.

Initially, a number of Polish and Ukrainian officials rushed to claim that the rocket had been fired by Russian forces, arguing it constituted a direct attack on NATO territory.

However, Poland has since acknowledged that the incident was most likely the result of a Ukrainian air defense missile that went astray - a view that has been echoed by NATO and Washington.

Poland booked their place at the 2022 World Cup in Qatar after emerging from a European qualifying playoff final against Sweden back in March.

The Poles had initially been due to face Russia in Moscow in a playoff semifinal, but refused to play the match because of the conflict in Ukraine.

Coached by Czeslaw Michniewicz, Poland begin their World Cup Group C campaign against Mexico on Tuesday, before taking on Saudi Arabia and Argentina in a bid to reach the knockout stages.

READ MORE: Why Qatar will be a World Cup like no other