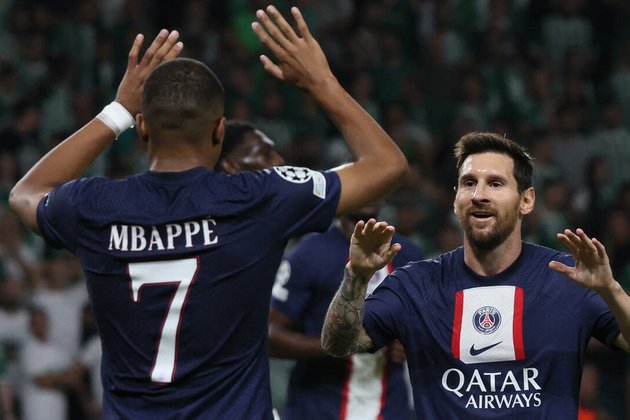 Kylian Mbappe struck a late winner for Paris Saint-Germain against Nice on Saturday night to restore their two-point advantage over Marseille at the top of Ligue 1.

The 23-year-old France international came on in the 59th minute as Nice were beginning to dominate the game at the Parc des Princes.

He latched on to Nordi Mukiele's pass and stroked the ball under the Nice goalkeeper Kasper Schmeichel.

The relief of the faithful was palpable.

For the 15 minutes before his strike, Lucien Favre's team held the ascendance. Driven forward by the tricksy Sofiane Diop and anchored by the veteran Dante, they were more muscular in the challenges. And more menacing in possession.

Their renaissance was all the more noteworthy for their refusal to buckle after yet another moment of genius from the left foot of Lionel Messi.

In the 28th minute, the 35-year-old Argentine went on one of his trademark darts towards goal.

It was stopped 25 metres out by Dante's boot.

Neymar and Messi stood over the ball for the free-kick. Neymar ran past it and Messi scooped it over the wall and past a flummoxed Schmeichel.

It was ample reward for PSG's enterprise against the obdurate Nice back line.

The dynamic duo lined up again over the ball. This time Messi ran past and Neymar scooped the ball over the wall. But also over Schmeichel's crossbar.

Messi flashed a shot over the bar soon after as Ekitike started to make his leggy presence felt.

Just after the restart, Nice levelled. Youcef Atal crossed from the left and Gaetan Laborde slammed past the PSG goalkeeper Gigi Donnarumma.

PSG boss Christophe Galtier - facing his old club for the first time since quitting to take over at the Parc des Princes - put down the rebellion by sending on Mbappe for Etitike and Nuno Mendes for Juan Bernat.

Nice responded with the withdrawal of Aaron Ramsey and Ross Barkley for Kephren Thuram-Ulien and Nicolas Pepe.

But it was Mbappe who made the difference.

On Saturday afternoon, Rennes moved up to fifth following a 3-1 victory at Strasbourg.

The hosts were reduced to 10 men after 28 minutes following Gerzino Nyamsi's crude hack on Benjamin Bourigeaud.

He set up his side's second for Martin Terrier juster after the restart and Amine Gouiri made it three on the hour mark.