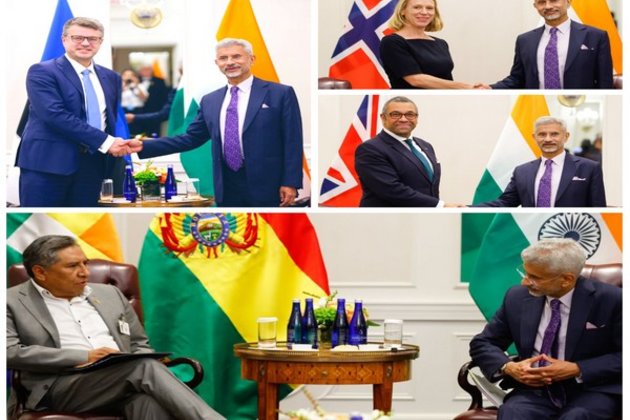 New York [US], September 22 (ANI): External Affairs Minister S Jaishankar, who is on a 10-day visit to the United States, met with his Estonia counterpart Urmas Reinsalu on the third day of the 77th session of the UNGA, on Wednesday (local time) at the UN headquarters in New York.

Jaishankar is in the US for the United Nations General Assembly (UNGA) meeting.

"A good conversation with FM Rogelio Mayta of Bolivia. Spoke about our development partnership and expanding our economic engagement. Exchanged views on global developments," Jaishankar tweeted.

"Our conversation also covered global issues including Indo-Pacific, Ukraine and UNSC matters. Shared my concern about the security and welfare of the Indian community in UK. Welcomed his assurances in that regard," Jaishankar said in a tweet.

Jaishankar interacted with three presidents and four foreign ministers, on the second day of the 77th session of the UNGA, on Tuesday (local time) at the UN headquarters in New York.

Jaishankar is in the US for the United Nations General Assembly (UNGA) meeting. He met French President Emmanuel Macron, Ghana President Nana Akufo-Addo and Comoros President Azali Assoumani in the US.

Apart from that, the External Affairs Minister also met four of his counterparts including Denis Moncada from Nicaragua, Alexander Schallenberg from Austria, Najla al-Mangoush from Libya and Mevlut Cavusoglu from Turkiye.

To discuss the ongoing cooperation between India and Ghana, Jaishankar called on the President of Ghana at UN headquarters in New York.

Jaishankar has more than 50 official engagements in total. The highlights of Jaishankar's meetings particularly with developing countries from Asia, Africa, Latin America, the Caribbean and Small Islands are sharply focused on the reform of the UN Security Council.

Jaishankar will address world leaders at the General Assembly on Saturday, after which he will leave for Washington and a meeting with US Secretary of State Antony Blinken. (ANI)