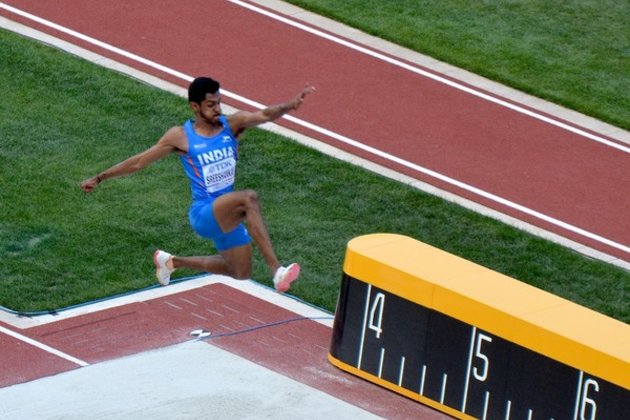 Birmingham [UK], August 2 (ANI): Indian athletes Murali Sreeshankar and Muhammed Anees Yahiya have made it to the finals of the men's long jump event after landing in the top three in the qualification rounds of their respective groups at the ongoing Commonwealth Games 2022 in Birmingham on Tuesday.

In his group A qualification round, Sreeshankar made a jump of 8.05 m in his first attempt. This was all the Indian needed to reach the final. He was at the top of the leaderboard from the get-go and nobody could outdo him. At the second position was Laquan Nairan of Bahamas with best jump of 7.90 m. Jovan van Vuuren of South Africa was in the third position with the best jump of 7.87 m. The top eight athletes from the group qualified for the finals.

In the Group B qualification round, Anees was also off to a good start, making a jump of 7.49 m in his first attempt. He made a jump of 7.68 m in his second attempt and another 7.49 m in his third attempt, finishing with the best of 7.68 m.

Next, from 12:03 AM onwards will start the qualifying round of the Men's High Jump. Tejaswin Shankar will represent India in this.

US, India to hold military exercise near disputed Chinese border

WASHINGTON D.C.: The U.S. will participate in a joint military exercise in mid-October with India, less than 62 miles from ...

MOSCOW, Russia: A leading Russian scientist in the field of hypersonic flight, Dr. Alexander Shiplyuk, has been arrested on suspicion ...

Citing safety of children, LA to move homeless away from schools

LOS ANGELES, California: During a meeting that was disrupted by protesters this week, the Los Angeles City Council voted to ...

WASHINGTON D.C.: The U.S. Justice Department announced this week that former Puerto Rico governor Wanda Vazquez has been arrested in ...

OTTAWA, Ontario: Military trainers from Canada will head to the United Kingdom to teach Ukrainians new techniques for fighting the ...

US gas prices below $4 per gallon after demand falls

WASHINGTON D.C.: Providing relief to drivers in the United States, the average retail gasoline price in the US fell below ...

NEW YORK CITY, New York: Walmart could sign a deal with Disney, Paramount, or Comcast, with the aim of breaking ...

Domino's pizza shuts down all stores across Italy

MILAN, Italy: Milano Today has reported that seven years after launching in the country, American pizza giant Domino's has now ...

TOKYO, Japan: Toyota has advised the owners of its BZ4X electric SUV to stop driving their vehicles and return them ...

WASHINGTON D.C.: The U.S.Department of Justice is reportedly preparing to sue Google as soon as next month, claiming that the ...