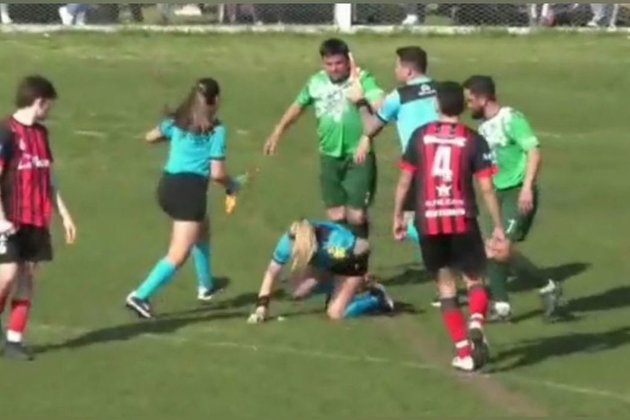 The incident occurred in a Buenos Aires province in Argentina

An episode of what the Argentine press has dubbed "inexplicable violence" occurred in the Gonzalez Chaves province of Buenos Aires on Sunday when a male footballer player, Cristian Tirone, appeared to punch female match referee Dalma Magali Cortadi in the head from behind.

Tirone, who was playing for Deportivo Garmense, was described as acting unprovoked given that his team were winning 2-1 against Independencia de Chavez.

When Cortadi called a foul for the opposition around the halfway line from a non-dangerous position, however, Tirone lost his head and made up some ground to strike Cortadi from behind, as video footage on Twitter shows.

Tirone was separated from the referee by other officials while trying to continue the attack, and the match was immediately called off as police then arrested him.

According to Argentine national sports newspaper Ole, Tirone was still being detained at a local police station on Sunday evening while Cortadi "ended up in hospital under observation due to a blow to the head, scratches, and a blow to the arms" as she explained to the outlet in an interview.

Cortadi also underwent CT scans, and explained that it may now be impossible for her to work.

Once she has recovered, she will talk to her family about whether she should continue refereeing.

"The important thing now is that justice is done, that it does not happen again and that it won't happen to anyone [else] ever again," she stressed.

"Gender doesn't matter here. We go to work, many of us make a living from this, we like it and we do it out of vocation. We want justice to be done and for this man to pay for what he did. That's what's important," Cortadi added.

Describing the attack, she too claimed that it was completely unprovoked and that the decision she made did not justify Tirone's reaction.

Though footage appears to show Tirone not connecting cleanly with his punch and instead smashing the referee with the inside of his arm, before she gets up a few seconds after being knocked to the ground, Cortadi said she was left unconscious by the impact of the blow and then felt dizzy and vomited which meant she had to be taken to hospital.

After being discharged, she then went to the police station to make a statement and insisted to Ole that she wants to see Tirone banned from football indefinitely.

"You have to throw him away forever. He should never be in any club," she said.

"He is a violent person, who must also be so in his daily life. A normal person does not do this. No person deserves this, we shouldn't get hit. I hope he pays for what he did."

Cardoni's wishes were reiterated by several social media users who also demanded that Tirone never kick a football again in competitive action while lamenting the violence in Argentine society.

On the same day Cardoni was attacked, Boca Juniors defender Agustin Sandez was assaulted and carjacked by thieves who took his vehicle and all his belongings.