Not there yet: Biden on possible easing of tariffs on China 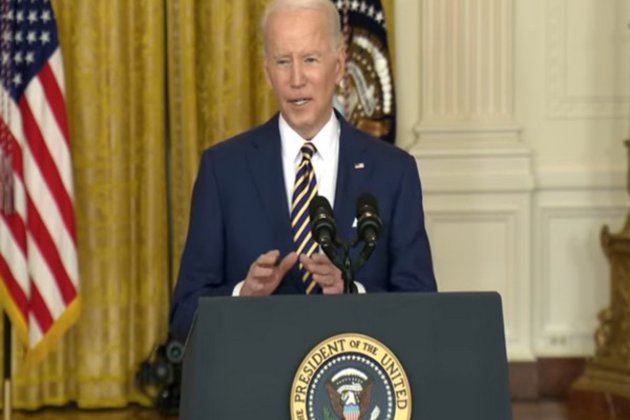 Washington [US], January 20 (ANI): Despite calls from US businesses to relieve the duties, US President Joe Biden said that he's not ready to lift tariffs that have been imposed on Chinese imports, adding that his chief trade negotiator Katherine Tai is working on the issue.

US Trade Representative Katherine Tai is "working on that right now," said Biden on Wednesday marking his first year in office. But "the answer is uncertain," he added.

President Biden was referring to China's commitments under a Phase 1 trade deal signed by his predecessor Donald Trump. US businesses have long complained about the detrimental effects of punitive US tariffs on Chinese goods imposed by the Trump administration and some even stressed the need for a more comprehensive strategy for dealing with China.

China has fallen far short of its pledge under the two-year Phase 1 trade agreement to buy USD 200 billion in additional US goods and services during 2020 and 2021, and it remains unclear how the shortfall will be addressed. This leads to questions over how the Biden administration will hold China to commitments that have not been met, as well as tariffs on hundreds of billions of dollars of Chinese imports.

Like the Trump administration, the current US administration has also called out Chinese leaders and even businesses over abuses in Hong Kong and against ethnic Muslims in the Xinjiang region.

Although his successor, Joe Biden campaigned on a promise to end the trade war saying the steep tariffs on Chinese imports are hurting US consumers, farmers and manufacturers, his administration is now continuing to enforce the so-called "phase one agreement" made by China with the Trump administration in early 2020.

Phase One among other things commits China to purchase an additional USD 200 billion of not only US agriculture, but also manufacturing, energy, and services exports, by the end of 2021. As of now, China is estimated to have purchased only slightly more than 60 per cent of the goods it promised.

The US-China trade war is not the only factor having an impact on investments in China. Perceived human rights violations in Xinjiang, the erosion of Hong Kong's autonomy, China's zero COVID strategy, supply chain challenges, and rising costs are resulting in many global companies leaving China's shores. (ANI)