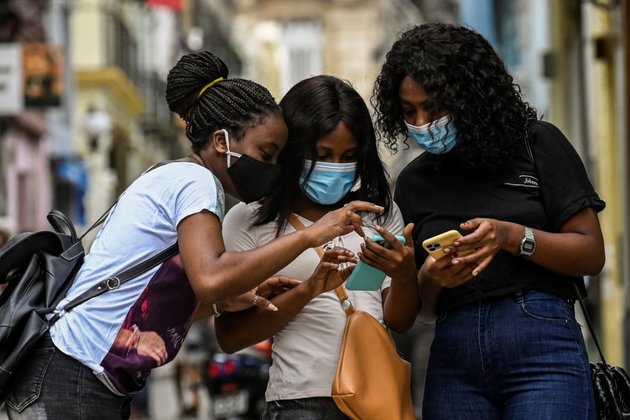 Chinese technology and expertise is making it possible for Venezuela and Cuba to exercise suffocating control over digital communications in the two countries, according to insider accounts and several international investigations.

Venezuela and Cuba do more to block internet access than any other governments in Latin America, according to the U.S.-based advocacy group Freedom House, which has documented what it describes as 'digital authoritarianism' in the region since 2018.

"Whoever believes that privacy exists in Venezuela through email communications, Twitter, WhatsApp, Facebook and Instagram is wrong. All these tools" are totally subject to government intervention, said Anthony Daquin, former adviser on computer security matters to the Ministry of Justice of Venezuela.

Daquin participated between 2002 and 2008 in delegations sent by former President Hugo Chavez to China to learn how Beijing uses software to identify Chinese citizens, and to implement a similar system in Venezuela.

FILE - A man looks at his smartphone as he stands near a display for Chinese technology company ZTE at the PT Expo in Beijing on Oct. 31, 2019.

Key to those efforts was the introduction in 2016 of the "carnet de la patria" or homeland card, developed by the Chinese company ZTE. While theoretically voluntary, possession of the cards is required to access a vast range of goods and services, ranging from doctor's appointments to government pensions.

The cards were presented as a way to make public services and supply chains more efficient, but critics denounced them as a form of "citizen control.'

Daquin said China's role in recent years has been to provide technology and technical assistance to help the Venezuelan government process large amounts of data and monitor people whom the government considers enemies of the state.

'They have television camera systems, fingerprints, facial recognition, word algorithm systems for the internet and conversations," he said.

Daquin said one of the few means that Venezuelans have to communicate electronically free from government monitoring is the encrypted messaging platform Signal, which the government has found it very costly to control.

The former adviser said Venezuela's digital surveillance structure is divided into five "rings," with 'Ring 5 being the most trusted, 100 percent Chinese personnel supervising."

According to Daquin, the government receives daily reports from the monitors that become the basis for decisions on media censorship, internet shutdowns and arbitrary arrests.

FILE - In this Oct. 31, 2019, photo, a man uses his smartphone as he stands near a billboard for Chinese technology firm Huawei at the PT Expo in Beijing.

US accusations against Chinese companies

Several Chinese technology companies are active in Venezuela, including ZTE, Huawei and the China National Electronics Import & Export Corp. (CEIEC). The latter was sanctioned in 2020 by the U.S. Treasury Department on the grounds that its work in Venezuela had helped the government of President Nicolas Maduro 'restrict internet service' and 'conduct digital surveillance and cyber operations against political opponents.'

The U.S. Senate Foreign Relations Committee also issued an alert in 2020. In a report, Big Brother, China Digital Authoritarianism, it accused Chinese telecommunications companies of facilitating 'digital authoritarianism" around the world and cited Venezuela as a case study.

Specifically, the committee mentions the existence of a team of ZTE employees working within the facilities of the state telecommunications company CANTV, which manages the homeland card database.

The document cites an investigation by the Reuters news agency, which reported it was told by CANTV employees that the card system allows them to monitor a vast range of information about individuals, including 'birthdays, family information, employment and income, property owned, medical history, state benefits received, presence on social media, membership of a political party and whether a person voted.'

'Maduro takes full advantage of Chinese hardware and services in his effort to control Venezuelan citizens,' the report says.

The Maduro government's efforts to block access to the internet by domestic opponents are "very crude,' according to Luis Carlos Diaz, president of the Venezuelan chapter of the Internet Society, a U.S.-based nonprofit that advocates for open development of the internet.

He said it takes nothing more than a phone call from a government official to the operator of a web portal to have a website or social media outlet blocked for a time.

However, in 2019, Venezuela blocked The Onion Router, or TOR, one of the most sophisticated systems used globally to allow internet users to remain anonymous and bypass censorship. The platform directs messages through a worldwide network of servers so the origin of a message cannot be identified.

Diaz said that, unlike other recurrent blockades in Venezuela, the TOR hack did require a higher level of knowledge.

'There, we raised alerts because it was excessively serious," he told VOA. "It meant that the Venezuelan government was using technology like the one used in China to block users who had TOR, a tool used to circumvent censorship.'

The TOR blockade lasted a week, and Diaz said he doubts that the Venezuelan government did it by itself, because it lacks the highly trained people needed for such a complex operation.

The internet infrastructure in Cuba was also built with equipment acquired from Chinese companies. The Swedish organization Qurium, in a report published at the beginning of 2020, said it had detected Huawei eSight network management software on the Cuban internet. The purpose of the software is to help filter web searches, according to this organization.

Cuban dissidents say the only way to access pages censored by the government on the island is through a virtual private network or VPN, which tricks the system into believing that the user is in another country.

This 'is the only way to enter any controlled website,' said journalist Luz Escobar, who converts web content into PDF format or newsletters and sends those by email to users of 14yMedio, an independent digital news outlet that is blocked from uploading its content to the internet. In Cuba, however, "few people master this technique,' she said.

Internet censorship in Cuba was investigated in 2017 by the Open Observatory of Network Interference (OONI), a volunteer-based organization that monitors internet censorship around the world. The group said it was able to determine that a Chinese company had developed software for public Wi-Fi portals on the island 'because they left comments in the source code in Chinese."

'We also found a wide use of Huawei equipment,' said Arturo Filasto, a project leader at OONI who had traveled to Cuba and tested various Wi-Fi connection points provided by the government.

Voice of America asked for comments from the three government entities in question - Cuba, Venezuela and China - but did not receive responses from any of them before publication.

China continues to tutor countries with an 'authoritarian tendency'

In a 2021 report on internet censorship, Freedom House said Venezuelan officials, along with representatives from 36 other countries including Saudi Arabia and Syria, participated in Chinese government training and seminars on new media and information management.

China has organized forums such as the World Internet Conference in 2017 'where it imparts its norms to authoritarian-leaning governments,' the report concluded.

Justin Sherman, an information security expert at the Atlantic Council's Cyber Statecraft Initiative, told VOA that Chinese companies like Huawei and ZTE have 'been involved all over the world, not just in Venezuela, in creating programs of internet censorship surveillance for governments, intelligence services and police agencies."

Sherman said it is not clear whether Chinese companies sell their surveillance technology to authoritarian governments solely for profit. The thesis of the 2020 Senate Relations Committee report is that there is an interest in China to go beyond the sale of its technology services to extend its policy of 'digital authoritarianism in the world."

LONDON, England: In a statement on January 17, Amazon UK said it has canceled plans to stop accepting Visa credit ...