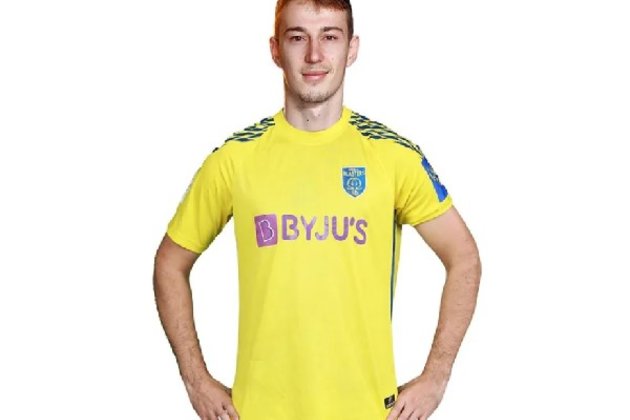 "I'm happy to be coming to Kerala Blasters. We have a lot of challenges ahead of us but my intention and motivation to come to this great club is clear -- I can't wait to start winning together," said Leskovic in a statement.

The 30-year-old has over 150 games of experience playing in the Croatian top division. He began his career at NK Osijek and made 35 senior appearances for the club.

Later, Leskovic was transferred to HNK Rijeka, signing a four-year contract, where he made 41 appearances which got him qualified to play for the group stages in the UEFA Europa League.

Leskovic was then transferred to Dinamo Zagreb in July 2016 and was loaned out to NK Lokomotiva in January 2020 until the end of the season. The versatile centre-back also has experience operating in left-back and defensive midfield.

"Leskovic is a high-level defender who has come to Kerala Blasters with high motivation to perform well. I'm happy that we finalized this deal and finished recruitment for the upcoming season. I wish Marko all the best this season," said Karolis Skinkys, Sporting Director of Kerala Blasters.

Leskovic has represented his country at all youth national levels from U18 to U21. He made his debut for the Croatian Senior National Team against Argentina in 2014. His last international appearance was against Estonia.

The Croatian defender joins Kerala Blasters as the sixth and final overseas player and will link up with the squad in Kolkata, where the team is participating in its inaugural Durand Cup. (ANI)

Court orders US to reinstate 'Remain in Mexico' policy for migrants

SAN DIEGO, California: The Biden administration will return to a Trump-era border policy in which migrants will have to remain ...

WASHINGTON D.C.: The U.S. Transportation Security Administration (TSA) has confiscated a record number of guns at airport check-ins in 2021.TSA ...

UK to return to Nigeria statue taken in 1897

LONDON, England: A bronze rooster, taken from what is now Nigeria by British troops in 1897, will be returned to ...

BOLZANO, Italy: According to a scientific study published in the journal Current Biology, workers at a salt mine in Austria ...

BEIJING, China: An app used by Muslims throughout the world, Quran Majeed, has been removed by Apple at the request ...

TAIPEI, Taiwan: Foxconn, the Taiwanese electronics giant that assembles Apple's iPhones, will unveil three of their own electric vehicles this ...

BEIJING, China: Amid anoutlook for cold winter temperatures, China's quest for obtaining larger volumes of natural gas is expected to ...

NEW YORK, New York - Stocks were mixed in the United States on Monday as market participants weighed up a ...

NEW YORK CITY, New York: Shares of Virgin Galactic fell up to 20 percent after the company announced that it ...

SYDNEY, NSW, Australia - Shares across Asia were mostly lower on Monday on news of a slowing of China's economy, ...