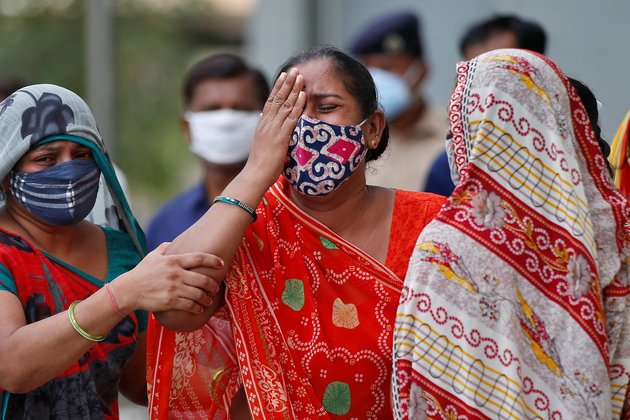 Public health experts believe the staggering statistics in India are likely higher and the surge of cases may not reach its peak until the end of May.

India's main opposition leader, Rahul Gandhi, urged Prime Minister Narendra Modi in a letter Friday to implement a national lockdown, accelerate the vaccination campaign and increase tracking of the virus and its mutations.

"Allowing the uncontrollable spread of the virus in our country will be devastating not only for our people but also for the rest of the world," Gandhi said.

Britain has declared a COVID variant from India as a "variant of concern."

Pope Francis said that he supports the temporary suspension of vaccine patents, according to news reports. He added that market forces, as it relates to the vaccines, must not predominate.

The World Health Organization Friday approved a COVID-19 vaccine developed in China for emergency use worldwide.

The vaccine, from China's state-owned drugmaker, Sinopharm, is the first vaccine manufactured by a non-Western country to be endorsed by WHO.

Friday's move was also the first time the global public health group granted emergency approval to a Chinese vaccine for an infectious disease.

The Sinopharm COVID-19 vaccine has already been administered to hundreds of millions of people in China and in other parts of the world, along with a second Chinese vaccine.

WHO's decision allows the Sinopharm vaccine to be included in the COVID-19 Vaccines Global Access, or COVAX, an initiative to distribute vaccines to mainly low-income countries.

WHO has said it could decide on China's second main vaccine, made by Sinovac Biotech, as early as next week.

Zients said that to help meet Biden's goal, the government will make walk-up, no-appointment shots available at 20,000 pharmacies around the country. The Federal Emergency Management Agency will also be shipping vaccines from high-volume vaccination centers around the country to smaller community-based sites, where they are more in demand.

In Mexico City, health officials announced that the occupancy rate in public hospitals dedicated to COVID-19 care is 16%, the lowest rate since the pandemic began. The rate is a marked change from January, when COVID-19 infections peaked in the city.

Spain is relaxing nationwide coronavirus pandemic measures this weekend; however, regional restrictions will remain in place in certain areas.

The COVID-19 pandemic has claimed more than 3.2 million lives around the world, according to the Johns Hopkins Coronavirus Resource Center. The U.S. has suffered the most deaths, with nearly 581,000. Brazil is rapidly catching up with the U.S. death toll, with more than 419,000 deaths, followed by India, with more than 238,000 deaths.

There have been 157 million global infections, according to Johns Hopkins. The U.S. remains the location with the most infections, with more than 32.6 million, followed by India, with 21.8 million infections, and Brazil, with 15 million.