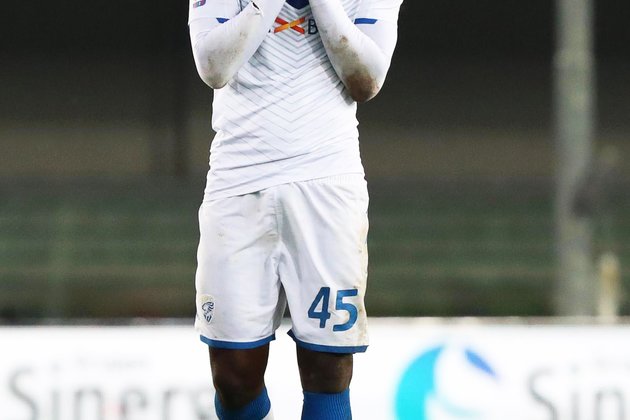 Italian striker Mario Balotelli has hit out at the "small minded" fans who have once again targeted him with racist abuse. The Brescia player kicked the ball into the crowd and threatened to walk off the pitch after being on the end of racist chants during the team's away game against Verona. His anger is understandable. It's not the first time Balotelli has been targeted. But very little seems to be being done in Italy - a country where racism in football has a long history.

It's not that these racist events aren't happening across the whole of Europe. In October, England's Euro 2020 qualifier put the issue under the spotlight in the UK when black players on the men's team were targeted with racist chants by Bulgarian fans in Sofia. And, as many pundits and ex-players commented then, England has its own problems that need to be addressed.

But in Italy, the issue of racism is even more acute. In September, Romelu Lukaku, the Belgium and Inter Milan striker, was racially abused during a match in Cagliari, forcing him to speak out. Balotelli has previously been targeted with the chant "non ci sono negri Italiani" ("there are no Italian blacks") by Juventus fans. Not to mention the now standard monkey chants endured by players like Stephan El Shaarawy (Milan), Kevin Prince-Boateng (Milan) and Samuel Eto'o (Inter Milan) in recent times. Indeed, in an angry post on Instagram following the latest attacks on Balotelli, Boateng said: "NOTHING has changed. But we don't give up."

Between 2011 and 2016, the Observatory on Racism in Football (ORAC) counted 249 racist incidents in Italian stadiums. But in the 2017-18 season alone, ORAC registered 60 racist incidents. One can simply dismiss these episodes as the rotten behaviour of the ultras (the most extreme fringes of football supporters), but the truth is that racism is not confined to these extremist fringes. Racism also penetrates the institutions that regulate Italian football.

The case of Carlo Tavecchio, the former president of the Italian Football Federation, is a prime example. In July 2014, during his presidential election campaign, Tavecchio criticised the excessive number of foreign players in Italian professional clubs, referring to players who "previously ate bananas" suddenly becoming first-team players. Despite this overtly racist remark, Tavecchio was elected president of the Italian FA and cleared of any wrongdoing by the Italian football authorities, whereas both UEFA and FIFA issued a temporary ban on him.

The world of football punditry also doesn't seem immune from racism. In September, Luciano Passirani, a sports commentator for the Milan-based local TV Telelombardia, was sacked for making an ugly racist comment about Lukaku.

Our research (which involved speaking to hundreds of Italian children of migrants in person and on social media) found that race is embedded in the way many Italians look at themselves. The Italian nation is thought to be constituted first and foremost by white Catholics, even if "Catholic" has gradually lost its religious dimension and become more of a cultural marker.

Despite various reform attempts, the nationality law (which lays down how people can get citizenship) privileges the so-called "bloodline" and marginalises the children of migrants who were born or educated in Italy. For example, the grandchildren of an Italian who migrated to Argentina last century and who no longer speak the language and have no connections to Italy are more entitled to obtain Italian citizenship than the children of Nigerian parents born or raised in Italy.

Our study found that neither the law nor the most of Italian society regards these children of migrants - also known as the "Balotelli generation" or G2 - as Italian.

Italian children of migrants told us many stories that captured the sense of displacement, puzzlement and surprise that white Italians experience when they hear someone - who doesn't look like them - speaking like them. Let's take for instance the experience of a Korean man who grew up in Bergamo, in northern Italy. After being adopted at a very young age by an Italian couple. When South Korea beat Italy in the football World Cup in 2002, he said suddenly all the city's Asians "became Koreans".

When he ran into a group of four youngsters in a car at a set of traffic lights, one of them shouted in dialect: "Bastard Koreans, get the fuck out of here!" He responded angrily in the same dialect. "They first looked puzzled," he said, "but then at the green light they skidded away and kept insulting me."

A young Italian woman, born and raised in Italy to an Eritrean mother and an Ethiopian father, told a similar story that happened on the day Italy won the World Cup in 2006.

Similar stories of everyday imbarazzismi) (a mix of embarrassment and racism) were recounted over and over again by our participants. The fact a person is born and brought up in Italy hardly seems to matter. What matters is their face and the colour of their skin. Because for those who regard Italy as an ethno-racial community, someone who is black or has almond eyes simply cannot be a real Italian.

If racism in Italian football is to stop, it has to stop first in Italian society. Kicking it out from the stadiums would achieve little if it is not kicked out from society first.