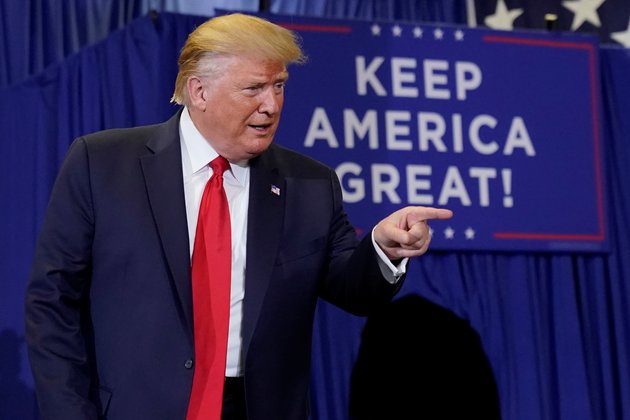 WASHINGTON - President Donald Trump dismissed three Republican challengers to his 2020 re-election as "the Three Stooges" on Monday and expressed doubt about ever agreeing to meet them on a debate stage.

"They're a joke. They're a laughing stock," Trump told reporters when asked whether he would agree to debate them during the 2020 nominating contest.

They face a formidable re-election effort mounted by Trump, who has consolidated his grip on the party's national and state machinery. A Reuters/Ipsos poll conducted Aug. 19 and 20 showed 87% of Republicans approved of his performance in office.

Sanford, who announced his candidacy on Sunday, said he did not believe Trump's popularity would last.

"I sincerely believe Trump is misguided on a whole host of issues. He's out of sync with voters in South Carolina. I think he has lost touch with the very voters that sent him to office," he told MSNBC on Monday.

Walsh has called Trump a bully and a coward who is unfit for office. Weld says another Trump term would be bad for America.

Before he left the White House for a rally in North Carolina, Trump also said he planned at some point to put out an "extremely complete" statement on his finances. Trump has refused for years to release his tax returns despite a long history of presidential candidates detailing their finances.

He said the financial statement would make clear he did not need whatever revenue was produced when U.S. military personnel stayed at his Turnberry golf resort in Scotland while on refueling stops.

"I'm going to give out my financial condition, and you'll be extremely shocked that the numbers are many, many times what you think. I don't need to have somebody take a room overnight at a hotel," he said.

Trump Promises Report on His Finances Before Election President promising to release new financial report of his personal holdings to the public before 2020 election, though he was vague on just what he would disclose that is new

In a tweet earlier, Trump recalled Sanford's disappearance in 2009 when, while governor of South Carolina, he met his Argentine mistress under the cover story of having gone hiking on the Appalachian Trail, only to be found out later.

"The Three Stooges, all badly failed candidates, will give it a go!" the president said, leaning on his penchant for bestowing derisive nicknames on his opponents. The Three Stooges were a vaudeville and slapstick comedy team whose antics regularly appeared on television.

Trump also denied having anything to do with the cancellation of Republican nominating primaries in four states, meaning he will face no opposition there. Canceling their primaries were Nevada and South Carolina, which are critical early voting states, as well as Kansas and Arizona.

"The four states that canceled it don't want to waste their money. If there was a race, they would certainly want to do that," Trump said.

Survivors recount horrors of the Holocaust

When the Nazis invaded Poland, overnight, nine-year-old Theodor Meron became "a refugee, out of school, out of childhood and constantly ...

DUBLIN, Ireland - A 37-year old man and his 27-year old wife each been sentenced to around five years in ...

LOS ANGELES - The sports world, particularly the NBA and the broader basketball community, is shocked at the news that ...

WASHINGTON, DC - U.S. President Donald Trump claimed Sunday that his lawyers "absolutely shredded" Democrats' case that he should be ...

WASHINGTON, DC - A blueprint the White House is rolling out to resolve the decades-long conflict between the Israelis and ...

SYDNEY, Australia - Stocks in Asia remained in sell-mode on Tuesday, a day after stock market falls were felt across ...

Nike on Monday suspended the sale of Kobe Bryant merchandise on its online store, multiple outlets reported.According to ESPN, a ...

NEW YORK, New York - Stocks around the world tumbled on Monday as fears escalated over the coronavirus which has ...

India puts its stake in national airline up for sale

Varadkar pressing for no trade quotas, no tariffs in Brexit deal

INGLEWOOD, California - The much-heralded SoFi Stadium being built at a cost of $2.6 billion in Inglewood, California, is now ...