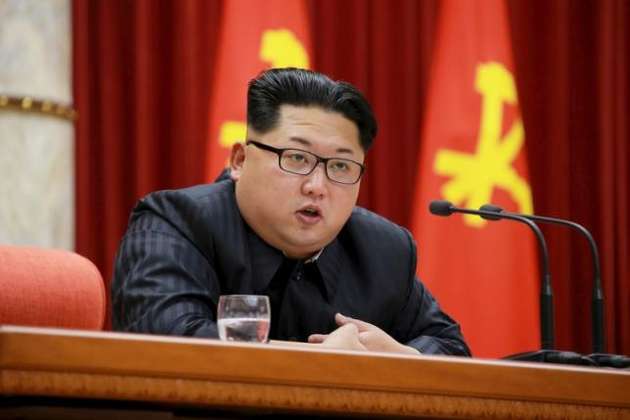 Kim said the country's "nuclear warheads need to deployed for national defense always and be ready for use at any time", according to the North Korean state news agency KCNA on Friday.

"Under the extreme situation that the US imperialist is misusing its military influence and is pressuring other countries and people to start war and catastrophe, the only way for our people to protect sovereignty and rights to live is to strengthen the quality and quantity of nuclear power and realize the balance of power," Kim said, according to KCNA.

It said that Kim stressed "the need to get the nuclear warheads on standby so as to be fired any moment."

The news agency also confirmed the test-fire of a new multiple launch rocket system. But it was unclear whether that event is the same launch by North Korea of "short-range projectiles", announced one day earlier by the South Korean Joint Chiefs of Staff.

On Thursday, North Korea was said to have fired six short-range projectiles into the sea off its east coast, just hours after the UN the Security Council approved the toughest sanctions on the North in two decades.

"We are aware of the reports. We are closely monitoring the situation on the Korean Peninsula in coordination with our regional allies," Commander Bill Urban, a US Defense Department spokesman, said in response to Kim's latest nuclear threats.

"We urge North Korea to refrain from provocative actions that aggravate tensions and instead focus on fulfilling its international obligations and commitments."

Meanwhile, a US-based think tank has reported that recent commercial satellite imagery showed new activity at North Korea's Sohae Satellite Launching Station that could be preparations for a rocket-engine test.

"One possibility is that these vehicles are returning from a delivery of supplies, fuel, or even engine components for testing to the stand," the report said.